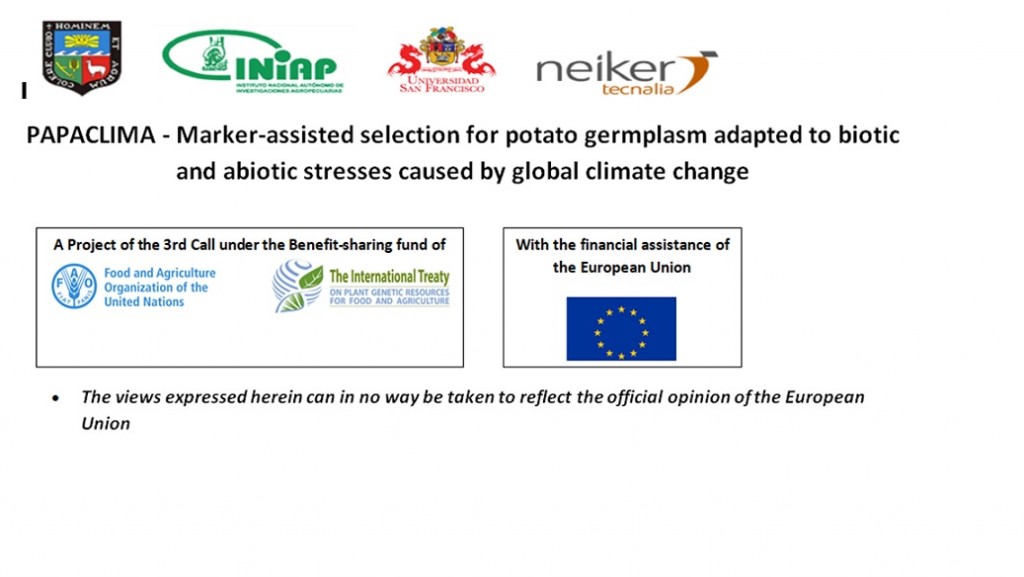 The effects of global climate change such as heat, coldness, drought or flooding are likely to threaten most crop species. Moreover, changes in their affecting pathogen spectrums can be expected and has been already observed for Phytopthora infestans, the most important potato pathogen. It is necessary to develop new cultivars which are adapted to these threats by applying MAS or genetic transformations based on useful candidate genes.

Potato (Solanum tuberosum) ranks as the world’s third most important food crop after wheat and rice (maize is used predominantly as fodder) and provides a significant contribution to the global food supply. Most of the actually cultivated potato species are not adapted to the threats of climate change, but large germplasm resources in form of Solanum wild species exist which carry important genes for resistance or tolerance to different stresses.

Large part of the genetic variation is located in the Andean regions of Peru and Bolivia. The aim of this project is to characterize cultivared and wild germplasm with respect to resistance and tolerance to different biotic and abiotic stresses and exploit it through breeding to obtain new potato varieties adapted to climate change for sustainable agriculture.

Genomic studies offer the possibility to characterize germplasm efficiently at the molecular level and to accelerate considerably breeding programmes. The detection of candidate genes for useful traits offers the possibility to apply them – after developing the corresponding markers – in marker assisted selection (MAS) within breeding programmes. The survey of allelic diversity of such genes within cultivated and wild species and analyses of their particular effects permits to select the most efficient allele combinations for these purposes. Within this project we want to identify useful candidate genes for different biotic and abiotic stresses using molecular tools, characterize the allelic variation of this germplasm and use the markers in marker assisted breeding.

To identify potato accessions adapted to biotic and abiotic threats of climate change and developing molecular markers which can be used for potato breeding of new adapted potato cultivars for sustainable agriculture.